Emma Stone is one of the finest actors working today. A multi-talented performer, the Arizona native is one of the biggest stars in Hollywood and with good reason. From humble beginnings to international superstardom the one constant in Stones glittering career is the quality of her work. Even in lesser films (The Amazing Spider-Man

), Stone stands out as a consummate performer, who always takes her roles seriously, whilst simultaneously not taking herself too seriously at all. With these qualities and such a high number of superb performances over the last decade, it is no wonder that Stone is one of the most popular and marketable stars in the world. If you’re still unfamiliar with the Oscar winner here are five good films for your viewing pleasure.

Stone’s breakthrough role was one that introduced her to teenagers everywhere in Will Gluck’s teen comedy Easy A. Starring as Olive Penderghast, Stone demonstrates her comedic talents with charm, flair and a healthy dose of good old-fashioned likeability. The plot revolves around a high school rumour mill and forces us to remember just how cruel teenagers can be. The film is a very loose adaption of the 1850 novel The Scarlet Letter. And whilst that might sound like somewhat of an odd premise for a teen high school flick the filmmakers have a lot of fun embracing (and indeed mocking) the source material. A great place to start if you haven’t seen an Emma Stone movie before.

From a light-hearted teen comedy to a reality questioning psychedelic drama. Birdman sees Stone in one of her most immersive roles to date. The film stars Michael Keaton in a strangely self-reflective role as a washed-up superhero actor looking to be taken seriously again. Stone appears as Keaton’s emotionally vulnerable drug addict daughter in a film which provides the actor with new territory to explore. Birdman isn’t as bleak as it sounds and is really worth a watch to appreciate the technical brilliance and sheer precision of director Alejandro G. Iñárritu and cinematographer Emmanuel Lubezki. Stone would go on to earn her first Oscar nomination for a role that elevated her to one of Hollywood’s finest young actors.

One of Stone’s most noteworthy performances is as journalist Eugenia ‘Skeeter’ Phelan in Tate Taylor’s memorable period drama The Help. The film follows the story of two black maids during the tumultuous civil rights movement in 1963. Skeeter helps to write a book exposing the everyday racism taking place in Jackson, Mississippi during this time of socio-political upheaval. The writing of this book and the outcry that follows provides the basis for a truly eye-opening story that sees racism tackled in one of its ugliest forms. The film is a harsh exposé of the racist views present in the early 60s and gives its audience a great insight into a thankfully long gone era. Stone shares the screen with such talent as Viola Davis, Jessica Chastain, Bryce Dallas Howard and Octavia Spencer who won an Oscar for her role as Minny Jackson. An enlightening film that is well worth your time.

Stones most recent cinematic performance is also one of her best. Battle of the Sexes sees the actor take on the role of tennis legend Billie Jean King with spectacular results. Directed by Jonathan Dayton and Valerie Faris the film follows Billie Jean through key moments in her life and career. Stone gives a nuanced performance as a world-class tennis player struggling with her form, her finances and her sexuality. Stone’s King must also navigate the founding of the Women’s Tennis Association which proves to be a fascinating subplot and essential viewing for any tennis fan. But as the title suggests the meat of the movie is concerned with 1973s ‘Battle of the Sexes’. The match was an exhibition between Billie Jean and over the hill former tennis champ Bobby Riggs played brilliantly with skin-crawling sexism by Steve Carell. The match was a huge commercial spectacle and proved to be a breakthrough moment for Women’s tennis. The film does a tremendous job of capturing the atmosphere of the event and provides one of the most visually satisfying tennis matches in cinematic history. Stone uses all of her acting chops in one of her most impressive performances proving herself more than capable of recapturing the brilliance of a sporting icon. 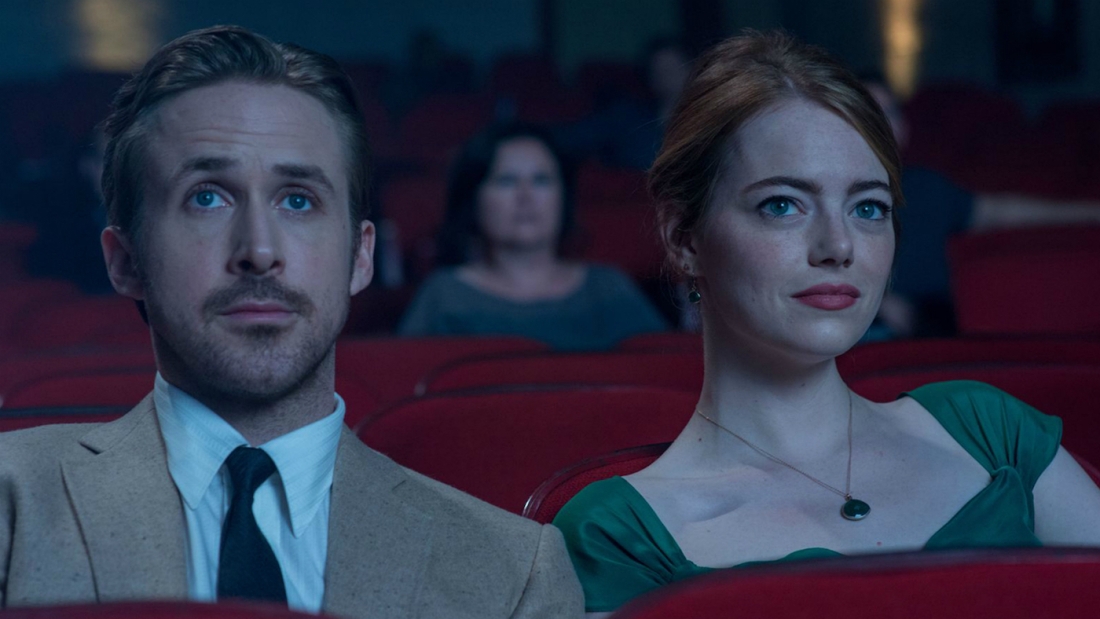 La La Land is a remarkable film. Remarkable for how brilliantly it brought ‘old-school’ musicals back to the big screen and remarkable for its unprecedented level of success. To the surprise of no-one, the film swept up every major awards ceremony of 2016. Stone stars alongside frequent collaborator Ryan Gosling as aspiring actor Mia. Down on her luck and working in a coffee shop Mia finds solace and romance in Gosling’s disenfranchised jazz-fiend, Sebastian. What follows is a truly breathtaking film that revels in the lush history of cinema. The film pays homage to classics like Casablanca

and Rebel Without a Cause

all whilst undoubtedly benefiting from the techniques of modern filmmaking. Incredibly choreographed musical numbers and beautifully vibrant visuals reveal the films modern technical foundations. Director Damian Chazelle harkens back to a simpler time when musicals were rife with gorgeous melodies, heartwarming piano and ear-popping arrangements. The film cleverly straddles between its vintage roots and its modern production, offering a conclusion which is satisfying, relatable and will leave the audience thinking about La La Land long after the credits roll. Stone won an Oscar for her performance and cemented her status as one of Hollywoods most respected stars.